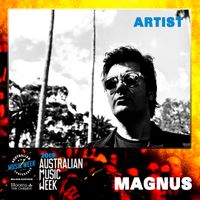 Showcasing more than 150 artists over its three days, Australian Music Week boasts genuine music discovery across an incredibly diverse cross-section of Australian and international music, from Indie, Rock, Pop, Electronica, Rock and Blues through to Folk, Americana and Country.

In fact, Australian Music Week plays host to the official annual Folk, Americana Music Conferences, as well as presenting more than 20 of its own panels and master-classes unpacking the latest industry issues with leading Australian and international experts.

The whole Footstomp team is headed down to Cronulla for Australian Music Week next month along with a number of our favourite artists! To celebrate this collection of wonderful humans we'll be throwing a party at El Sol featuring the likes of Mardi Wilson, Benny Nelson, LEANNE TENNANT, The Carbons (CAN) & Entermagnus Magnus! 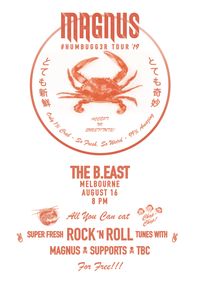 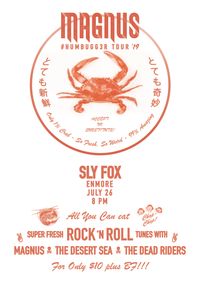 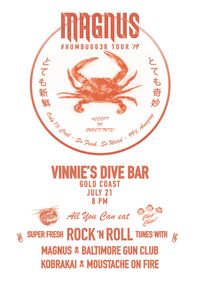 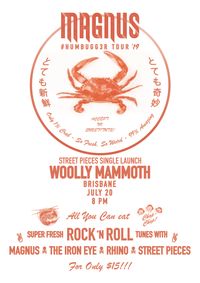 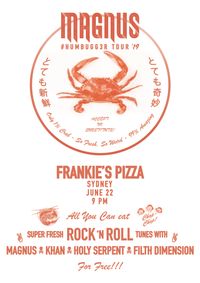 Magnus @ Frankie's Pizza by the Slice

The Wildbloods album tour makes it's way to Newcastle!

Magnus. + Yours Alone will be supporting

Supporting the Wildbloods for their album launch! 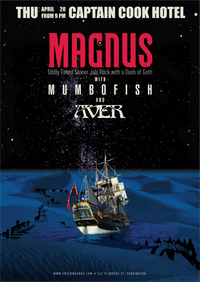 Sailing the surreal desert seas, some stoner rock to take you away from wherever you aren't.

Magnus. "The band clearly likes to tease and with terrific self-confidence in their undoubted abilities the approach does create a lively anxiousness within their music." - Sydney Morning Herald "Numbing hooks tied with groovy basslines, jam-worthy riffs and a voice so goddamn powerful the US are using it to overthrow Russia." - Blunt Magazine https://entermagnus.bandcamp.com/ https://www.entermagnus.com/music

mumbofish Having just returned from a six month break from playing live, Mumbofish (formerly Driftwood) are back with a new name and three new tracks ready to be released over the coming weeks. The Sydney-based four-piece band takes influence from a range of styles, but most notably from bands such as Queens of the Stone Age, Radiohead, Kings of Leon, and Led Zeppelin.

The band’s 2015 debut EP “Flowin’” was supported by live shows across Sydney, at venues including Frankie’s Pizza, Brighton Up Bar, Manly Boat Shed, The Record Crate, The Lair, and more. Their energetic new live set in support of the upcoming releases builds on this experience, mixing the old with the new, including brand new material as well as songs from their debut.

Formed in the astral plane in 2008, AVER are a heavy psych band from the sun-bleached shores of Sydney, Australia. Their debut self-titled DIY album titillated ear canals and laid the tracks for their acclaimed sophomore effort, Nadir, a booming psychedelic behemoth slab of sonic waves that has enraptured and charmed those who have taken the hour long trip. Nadir will be available worldwide through Ripple Music In the near future.

When not waking neighbors or ruining Christmas, AVER butters listeners up with riffs sensuously snaking around spines and intricate rhythms bouncing between synapses. A torrent of celestial hail dancing the dance they danced at the dawn of the man inside your skull. Some bands claim they can be your life, AVER are bigger than that. AVER are a churning cauldron of bubbling aural ayahuasca guaranteed to enliven the apathetic and deep clean your third ear.

"AVER might just be the best space-rock, stoner-metal act yet to emerge from Australia" - Doomantia "For crying out loud don't let this album pass you by!" - Ride With The Devil

"Nadir is a powerful and emotional album that's going to end up on a few peoples best of 2015 albums lists, including mine. Do yourself a favour and buy this album now. You won't be sorry." - The Sludgelord 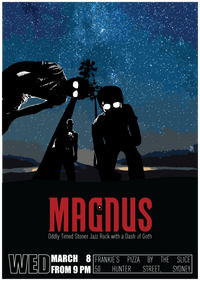 Frankies Pizza by the Slice

We've been busy writing a new album. March 8 at Frankie's Pizza By The Slice we'll be exclusively showcasing new tunes.

Sharing the stage with Craig Calhoun!

Magnus at the Crowbar (Brisbane)

Footstomp Music fucking LOVE guitars. To celebrate, we are working with our mates at the Crowbar to put on a killer Christmas party for lovers of music with volume. We've assembled a team of musicians who have been born and raised listening to only the best riffs, tantalising drum solos and amps glued to 11. Featuring musicians from all over the globe, this is your chance to bring in the holiday season in true rock style.

The Bear Hunt are reminiscent of 90’s alt rock with fuzzed out guitars, big melodies and big outros; Angular, weird, but super melodic. The band had recently entered Brisbane’s infamous recording studio “The Shed” with the talented Bryce Moorhead (Violent Soho, HITS, Texas Tea, WALKEN) to commence recording their next EP, due for release early 2017. The band have moulded their sound reaching into new heavier depths with their lead single, “Who Made You God?”; written earlier this year when the band embarked on a camping trip to Uki, NSW.

After blasting onto the scene earlier this year with their critically acclaimed debut album MAGNUS are certainly not showing signs of slowing down with a new single and national tour on the way. The bands latest offering “Ghost Town” is a darker sounding rock tune reminiscent of Iggy And The Stooges or early Queens Of The Stone Age

The release of “Romeo” and "Racket" saw Brisbane rockers Old Fashion gain spins on Rage and had the boys travelling the state to spread the good word of heavy guitars and 'moshable' melodies. Old Fashion’s new EP What Were We Thinking is a stone monument to who they are and what you anticipate from these thrilling musicians. Expect nothing less than riffs, thrashing choruses and guitar solos.

Forming in late 2015, Gold Coast rock outfit Chelsea Rockwells locked themselves away for months of intensive song-writing before bursting onto the scene with their explosive live show and impressive, unique take on heavy rock. After the successful release of “Aztec” earlier in the year Chelsea Rockwells have just released “Stone” the second single from the debut EP set for release early 2017.

On November 10th Tasmania's Verticoli will be hitting up Vic on the Park Hotel wtih local jazz-rock freaks MAGNUS.

Together for more than 5 years, the passionate three-piece has gigged relentlessly across Australia, and supported iconic Australian bands such as Kingswood, DZ Death Rays, The Delta Riggs, and British India. The band also scored themselves a spot at the 2014/2015 Marion Bay Falls Festival.

In 2016, the band has continued gigging and releasing new material, including the new single ‘Positions’, and a joint vinyl release and national tour with Melbourne band The Hunted Crows. 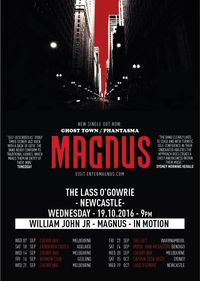 In Motion In Motion are a three-piece Alt-Rock band fresh out of Newcastle who formed in early 2014. In Motion consist of Jack Davis (drums + vox), Daniel Ennis (guitar) and Lachlan Fisher (bass + lead vox). The three boys are young, but skilled in the art of writing their own music and are renowned for their big, tight sound they bring to their stage. Their music reflects influences from bands like Powderfinger, Red Hot Chili Peppers and Kingswood and the end result is a strong, riff-heavy sound that sits deep in the pockets of the rhythm section with a powerful vocal to match. The last 6 months have seen In Motion establish themselves into the Newcastle scene, playing in venues they previously were too young to play in, such as The Cambridge Hotel, The Stag and Hunter and Lass O' Gowrie Hotel's supporting bands such as The Midnight Movers and Smoko Khan. Notably, they supported In Hearts Wake in 2014 on their regional tour. They have also played in venues throughout the Central Coast and Sydney. 2016 holds big things for In Motion, their first release, their first music video and plenty of gigs are coming their way. These boys are on a mission to bring themselves to the forefront of Australia's rock scene and are not a band to be missed.

Dividers "With a duo of moustaches on the rhythm section, I will say that this rock band was the stand-out of the night. With excellent dynamics and a well-rehearsed sound, this band sits somewhere in between Foo Fighters and Billy Talent. One of the stand-out songs, If These Walls Could Talk grabbed the audience’s attention and more and more people filtered into the room. Another highlight was their cover of Cupids Chokehold which they played in an almost prog-rock style." 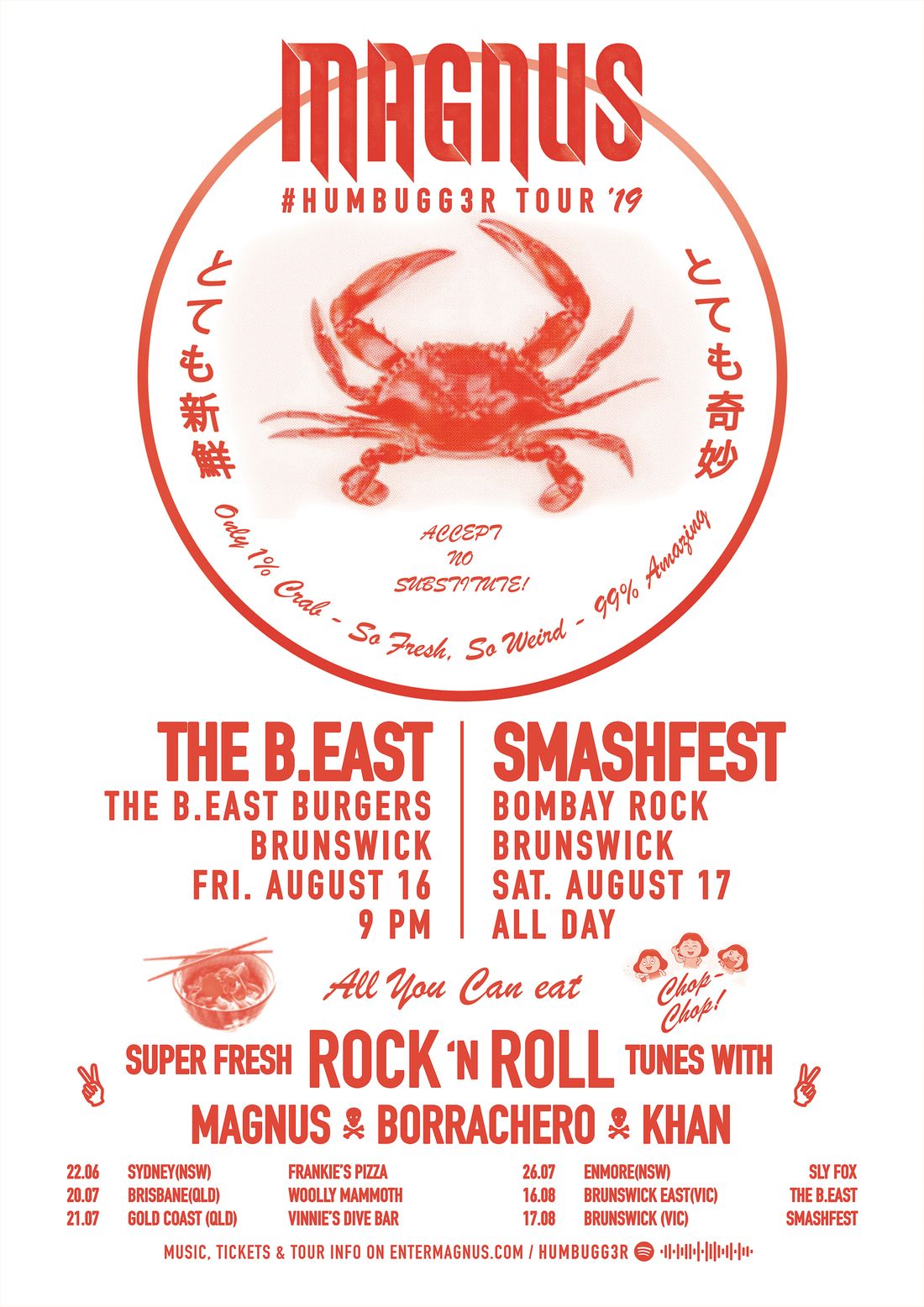